Dehydrated zucchini chips seasoned with Everything but the Bagel Seasoning are a great keto zucchini recipe for low carb snacking!
Jump to Recipe

Keto Zucchini Chips are a recipe made in the dehydrator, brushed with a little olive oil, and seasoned with Everything But the Bagel Seasoning. This zucchini recipe is a great way to preserve some of that produce that seems to flood the garden every year!

Say goodbye to carb laden potato chips, because there is a new chip in town! These Zucchini Chips are perfect for when you are looking for a crunchy snack, but want to stick to your Keto diet. The best part is you only need 3 ingredients to make this recipe and you won't feel guilty if you end up eating the whole bag!

As an Amazon Associate, I earn from qualifying purchases

Being on a low-carb diet can be challenging when you are looking for a snack. One of Grumpy's go to snacks was potato chips, and he was picky about those also! His potato chips had to be Lay's Wavy brand. In his day, he would eat an entire bag by himself!

We have a LEM Dehydrator that we bought to make jerky with. While we have made venison jerky a few times, I had yet to do anything else with it. Because we have a massive garden this year, I wanted to try dehydrating veggies. Making chips out of zucchini was my first feat!

Once of the problems with a garden, is if you miss a day getting out there, you can find overgrown zucchini the next day. I swear, zucchini has a growth hormone that causes it to expand 4 times it size in two days. I'm not kidding! We ended up having several zucchini that were a little on the large size.

When you have zucchini that has overgrown, you end up with a center that is soft and has large seeds. This is the part of the zucchini that really isn't the best to eat or use in cooking. When you make these Keto Zucchini Chips, you are drying that portion out. As a result, you are able to utilize the entire zucchini with no waste!

I love my OXO Mandoline for slicing. You have 4 settings for thickness as well as other slicing options, such as julienne and french fry cuts. For the Keto Zucchini Chips, I used the slicer attachment at the 1/16th inch cut and it was too thin. As a result, the center of the chip stuck to the dehydrator. I moved to ⅛ inch cut for my second batch and that was the perfect sized cut.

We bought a LEM 5 Tray Dehydrator last year so we could make jerky. Little did I realize, how handy it was going to be for us when we decided we wanted to start homesteading! Dehydrating vegetables is a great way to preserve them. And, I have been having a great time experimenting with it so far.

You will need 1 large zucchini, some olive oil, and Everything but the Bagel Seasoning. I found that one large zucchini was the right size to fill the entire dehydrator (that is 5 trays).

The great thing about this zucchini recipe is it is very versatile. While I used Everything But The Bagel Seasoning to season the chips, you could make any flavor that you wanted to! Possibilities are endless, just think of the different potato chip flavors out there and go with it!

I have seen where people will toss the oil and seasoning onto the zucchini and I did try that. However, I found that the zucchini slices still stuck together and tossing in oil doesn't solve that problem. Hence, there were some chips with no oil and no seasoning. Not to mention, some of the zucchini seems to become way to saturated with oil because of it.

Alternatively, I used my pastry brush. I lightly coated just one side of the zucchini slice with oil and sprinkled a tiny bit of Everything But The Bagel Seasoning over top. It is so easy and far less messy as your hands aren't getting oily from trying to separate zucchini slices that you tried to toss with oil and seasoning!

What to serve with Keto Zucchini Chips

What's a chip without a dip? We love to have chips and dip! Some of our favorite dip recipes to eat these Keto Zucchini Chips with are Quick and Easy Caramelized Onion Dip and Mom's Green Olive and Garlic Veggie Dip!

If your serving a variety of snacks to your family or guests I like to make these Keto Cheese Puffs or Keto Tortilla Chips. And, if you want to offer a sweet snack, try these Strawberry Rhubarb Cookies!

**If you made this recipe, please give it a star rating!** 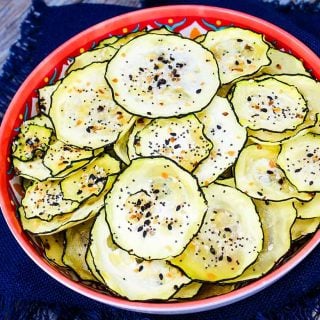 Keto Zucchini Chips with Everything but the Bagel Seasoning