This Venison Stroganoff is a homemade comfort food classic recipe made with wild game. The venison is smothered in a rich, smoky, and creamy sauce and poured over a big bowl of egg noodles. A delicious dinner recipe for game meat lovers.

All this Venison Stroganoff needs is a soft and delicious Quick Dinner Roll to soak up the sauce. I promise if you do this, there won't be a drop of broth left in the bowl.

For as long as Grumpy and I have been together, venison has been the main source of protein in our home. Every year we have a freezer full of venison backstrap, steak, stew, and mince. Grumpy loves a creamy venison and noodle recipe such as this stroganoff.

Grumpy makes what he calls Venison Slop. Which is really Venison with Mushroom Gravy, the canned soup version of Venison Stroganoff. Grumpy's version tasted different than this stroganoff recipe.

This version of stroganoff is made with a homemade sauce seasoned with a little bit of smoked paprika. It has the added tang of sour cream. Both recipes are delicious, but I have to say this is my favorite stroganoff recipe.

The origin of stroganoff recipes

Stroganoff was first known to be in mid-19th century Russia. It is believed to be a recipe created by French chefs who worked for the Stroganov family. And for whom the Stroganoff recipe is named after. In the U.S. it is generally made with beef in a sour cream sauce and served over noodles.

Many will take a shortcut to this recipe and use canned cream of mushroom soup as the sauce base. The meat is diced, cubed, or cut into strips and can be made with varying proteins such as this Venison Stroganoff.

What you need to make this Venison Stroganoff

Sour Cream: I always use full-fat sour cream. I want the real thing, a cultured cream with nothing else added to it. Some light sour creams will have a modified food starch added to it so be sure to read labels.

Beef Bone Broth: You want a broth that is quality and has great flavor. I love this brand.

Large skillet: I used a nonstick skillet with high sides. Some will use a cast iron skillet, which is fine, but I find it is not large enough for this recipe. A dutch oven can also be used.

To make this in a crockpot, season and brown the venison in a skillet with the olive oil. Transfer the meat to the slow cooker, then add the mushrooms, onion, garlic, 3 cups of beef broth, and paprika. Cook on low for 6 hours.

Turn the crockpot on high and whisk together the remaining beef broth and flour. Stir the broth mixture into the stroganoff and let it simmer on high, uncovered for 30 minutes. Stir in the sour cream and cooked egg noodles.

Using the saute settings, cook the seasoned venison, onion, garlic, and mushrooms for 4 minutes, or until mushrooms have shrunk. Stir in the flour until well combined, then add the beef broth and paprika. Cover with the lid and lock valve. Set the manual setting to high for 5 minutes.

*If you made this recipe, please give it a star rating* 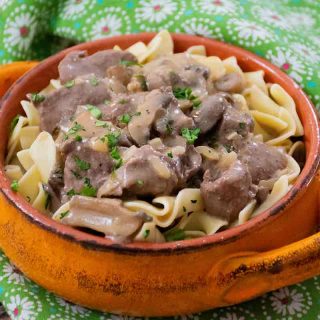 I'm Shelby, author of Honeybunch Hunts. I grew up with self sustaining parents and enjoyed the fruits of their harvest. This website is dedicated to recipes to preserve that harvest... read more about Shelby Law Ruttan
193 shares