Spinach Artichoke Pasta is a one-pot skillet recipe full of alfredo like flavors, tossed with spinach and artichoke hearts and topped with roasted pine nuts. It is a delicious vegetarian dinner recipe that is super easy to make with very little clean up afterward.

This pasta dish is a quick and easy vegetarian recipe that can be ready and on the table in 20 minutes. I love to serve this Spinach Artichoke Pasta meal with a this quick dinner rolls recipe that has been spread with garlic butter and toasted under the broiler!

I really love one-pot meals. They make clean up so easy and when everything is cooked in the same dish, it just seems to have so much more flavor!

A one pot meal is when you cook everything for one recipe in the same dish. The pot can be a frying pan, sheet pan, Dutch oven, or even the slow cooker!

This One-Pot Spinach Artichoke Pasta recipe is made in a deep skillet. The garlic is sauteed in the butter and then the liquid is added to the skillet and brought to a boil.

The pasta is added and is allowed to simmer in the broth. Just before serving, the spinach and artichokes are stirred in and then the dish is garnished with toasted pine nuts. It can be served in the skillet itself, or transferred to a serving bowl.

Linguine pasta, I like the flat noodle for this creamy pasta recipe but other shapes can be used.

Pine nuts, once toasted the pine nuts bring out a sweet nutty flavor that compliments the creamy pasta

Spinach is a super food that brings fiber, essential vitamins, and is also a good source of iron.

Artichoke hearts is another super food that is rich in fiber, vitamins, minerals, and iron.

Garlic, adds great flavor and is known for fighting off colds and flu.

Milk, I recommend using at least 2% or whole milk for this recipe.

Vegetable broth, I love using this golden broth packet. It has great flavor, plus it has been around a long time and stood the test of time! Another favorite is to make a broth with this vegetable concentrate paste.

A deep skillet works best. This my favorite skillet for one dish meals.

I love using my flat head wooden spoon to stir and toss.

Tongs for serving the pasta.

How to Toast Pine Nuts

When toasting any type of nut, it is important to keep a close eye on the process. Nuts will brown fast and they will burn even faster.

There are a few way to toast nuts. The quick and easy way to do it is in a small skillet where you can stand at the stove and toss them as they brown. The skillet method is the way I recommend toasting the pine nuts for this recipe.

*If you made this recipe for spinach artichoke pasta, please give it a star rating* 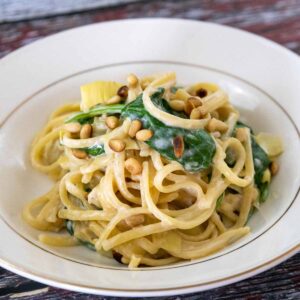