A pizza crust made low carb with mozzarella and cream cheese, almond flour, and an egg!
Jump to Recipe Print Recipe

This Low Carb Pizza Crust Recipe is a keto friendly dough made with mozzarella, cream cheese, and almond flour. It turns out to be a surprisingly delicious, keto friendly recipe that is easy adapt to flavoring, and very easy to make!

Our decision to eat Keto was due to Grumpy being diagnosed with diabetes. It was easier for me at first, but as time went on, Grumpy has found it easier to follow the low carb lifestyle.

Part of the reason it has not been as difficult as we expected is because I have been able to make recipes like this pizza crust. Being able to still enjoy pizza has been a big plus!

What is low carb pizza crust recipe made with?

This recipe is made with part-skimmed mozzarella cheese, cream cheese, almond flour, and egg. There are optional seasonings added to the crust to give it a little bit of flavoring.

Unfortunately, low carb pizza is lacking the gluten from flour. The gluten is what gives pizza its yeasty, doughy texture. This recipe will not be soft and doughy like a regular pizza crust. Rather it will be more like a crispy thin crust pizza.

Can I pick the pizza slice up with my hands to eat?

Low carb pizza crust is not as sturdy as one made with regular flour. However, once the pizza has cooled slightly, you can still consume it by using your hands.

This low carb pizza crust is similar to a thin crust pizza. It has a flavor closer to pizza crust due to the almond flour in the dough.

Similar to a thin crust pizza dough, this low carb pizza crust will become a staple for your keto kitchen!

First, you want to measure and sort your ingredients prior to assembly. This will make putting it together so much easier!

Place mozzarella and cream cheese in microwave safe bowl and microwave until soft enough to combine.

Add almond flour, seasonings and egg and mix until well combined. Return dough to microwave to soften dough should it become hard to mix.

Before placing pizza crust in the oven, prick several holes with the tines of a fork. This will help prevent "bubbling." Place pizza crust in oven and bake for 10 minutes. Watch carefully, if crust begins to puff up on top (bubbling), prick with a fork to deflate.

Take pizza crust out of oven and carefully flip it over onto the cookie sheet. Return to oven and bake another 10 minutes until lightly browned.

Your pizza crust is now ready to top with your favorite pizza toppings. Alternatively, you can cool it completely and freeze it up to 2 weeks, until ready to use.

If you made this recipe, please give it a star rating, thank you! 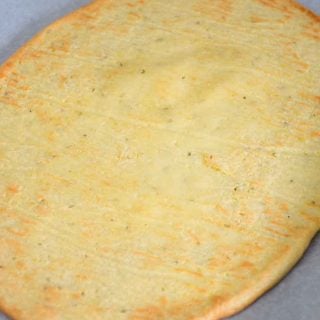